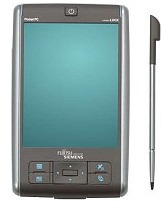 I found FSC Pocket Loox C550 device at home. Windows Mobile isn't much useful for my usecase. I tried generalize this article, to inspire people who willing try something new :) Status: old 2.6.27 patches Project: get Linux 3.x running and merged into mainline! Difficulty: Easy-Medium for system administrator with basic kernel and C knowledge

If you want try and have any from these devices, you can find me on irc #elinux or #htc-linux, nickname okias